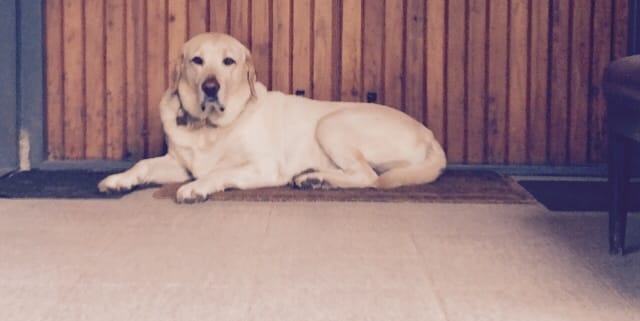 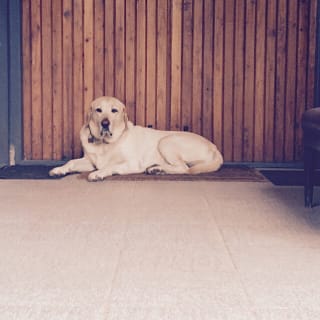 Death has a strange way of triggering emotions! Little Chewy died 10 days ago and it affected, rather continues to affect me, much more than I imagined it would. Even today, everytime I hear about him or think about him, it invokes a  sense of sadness. I have such strong feelings of loss of that delightful fawn coloured creature, with a wet snout and soft paws rubbing his face and his body against my legs, asking me to pet him or the lazy wag of his tail or the excitement that would get him to do anything in exchange for his treats. Chewy was the most well behaved and the smartest lab I have ever come across especially when it comes to his uncanny ability to sense emotions in people. Everytime, I have had a bad day, (over the last year, I have had a few!) Chewy made an extra effort to either come sit by me or make me pet him or at times, even getting up from  his lazy perch and walking to me with his tail wagging like a helicopter blade!
His sense of loyalty to Linda was unparalleled! He missed her and was miserable when she wasn’t around (at times when she was just out of his sight too!) All she had to do, was whistle and he was be there within seconds, dropping whatever he was doing. And with kids, he was exceptional! I have seen kids pull his tail, flap his years and even hit him lightly but never once have I heard him snap or growl. All he had was a lazy expression on his face and I feel he may have been thinking “oh gosh! These kids I tell you – ANNOYING!” Anya and Aaron, the two kids who saw chewy quite often, are both too young to understand or even comprehend what has actually happened or even what death means, but it sure was a joy to watch their faces light up as soon as they saw Chewy. Of course it was one of the earliest words they both learnt in their vocabulary 🙂
After some thought I have come to realise that my strong emotions about Chewy were triggered by the thought that I didn’t get to say a goodbye and how much I loved him! Just as Linda was talking about Robin’s last memory, it struck me that my last memory of Chewy is, one of him sick and lying down struggling to get up by himself. He lay on the grass just as I walked into the campus that Friday morning. As I neared him, he whimpered and wagged his tail as much as he could. Chandra lifted him up and put him in his spot in the car to go to the hospital, for what would be his last car ride. I petted him and Chandra wiped off all his saliva and shortly after, they left and that was the last I saw little Chewy alive. I wish I had told him my goodbye and reminded him that there was no one else in this world that was so universally loved as he was. He treated everyone as his friend and I love Robin’s description of Chewy – a therapeutic dog!
Chewy I miss you! You have a very special place in my heart and I learnt so much from you. You made my day innumerable times and am sure that I am not the only one who feels this. I hope I can learn to love, care and protect like you. You are my rockstar!
I love you Chewy!
Kaustubh (Kau)
From the Breakthrough Team
https://mljhzhkit9tv.i.optimole.com/w:auto/h:auto/q:mauto/f:avif/https://breakthrough-india.com/wp-content/uploads/2017/01/image1.jpg 640 640 Breakthrough Admin https://breakthrough-india.com/wp-content/uploads/2020/08/BreakThrough-logo-colour.png Breakthrough Admin2017-01-19 09:55:002021-06-21 06:49:04Tales from Chewy
0 replies

Fit or Misfit: The significance of proper sports gear in adventure/outbound...

A poem dedicated to Breakthrough
Scroll to top