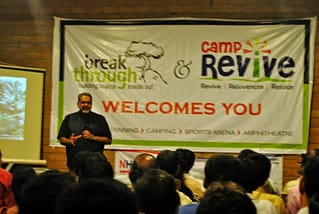 Breakthrough, in partnership with Esther Enterprises, a renowned property development firm inaugurated an Outbound training and camp centre called Breakthrough @Camp Revive in Hosur.
Krish Dhanam, Global Ambassador, Ziglar Group was part of the inaugural event and addressed members of the NHRD, Hosur Chapter and Junior Chamber International on the topic “The Art of Top Performance”. This was based on the book “Top Performance” by Zig Ziglar which he had co-authored. It was a fitting topic to the inauguration of the centre that will strive to bring the best from teams in corporates, colleges, schools and NGOs.
Hosur is the third Breakthrough centre to be opened. The centre houses challenge courses including Low ropes and a High ropes course and camping facilities which will be used for Outbound training for corporates, colleges, schools and NGO’s. Speaking on the inauguration, Robin Paul, CEO, Breakthrough said “We are excited in entering into the Hosur market. We hope Breakthrough @ camp revive will open doors for corporates, colleges, schools and other groups to experience Outbound training and camping in a fun and impactful way”.
Camping which is also a key focus of the facility includes a variety of outdoor games like football, Volley ball, paint ball, along with an amphi-theatre and other camping facilities. Speaking on the opening, Francis Selvaraj, CEO, Esther Enterprises, said “The project began with a vision to provide an opportunity for people of all ages to build character through sports and to be better citizens of our nation.  We hope to give opportunities for people to revive, rejoice and rejuvenate”
Breakthrough @Camp Revive will promote a balanced lifestyle at a time when 24/7 work places have invaded the Indian Economic Scene. Due to target oriented work places, people in general have slipped into a highly depressed and inactive lifestyle. Hence, everybody needs a Revival mentally and physically.
https://mljhzhkit9tv.i.optimole.com/w:auto/h:auto/q:mauto/f:avif/https://breakthrough-india.com/wp-content/uploads/2014/08/Krish-2BDhanam-2C-2BGlobal-2BAmbassador-2C-2BZiglar-2BGroup-2Bat-2Bthe-2Binaugural-2Bevent-2Bat-2BBreakthrough-2B-40-2BCamp-2BRevive-2C-2BHosur-2B-800x536-.jpg 536 800 Breakthrough Admin https://breakthrough-india.com/wp-content/uploads/2020/08/BreakThrough-logo-colour.png Breakthrough Admin2014-08-23 05:12:002021-06-21 08:46:33Breakthrough @Camp Revive the first Outbound training and Camp Centre inaugurated in Hosur
2 replies

The Vision of Impacting Lives