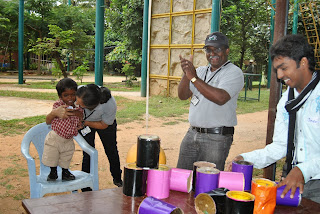 Breakthrough organized a unique Outbound Experiential learning program for differently abled children on December 2nd, 2013, the eve of World disability day. Breakthrough, is a leading Outbound training service provider with a mission to impact lives in corporates, colleges, schools and NGOs. With that mission in mind, differently abled children supported by four NGOs, U&I, Rakkam, Provision Asia and Asha Kiran were invited to participate in an event designed to create fun filled experiences. The program was based on the theme by the UN for World Disability Day, “Breaking barriers, Open Doors: for an inclusive society and development for all”.

The guest of honor for the day was Inder, a champion who worked through his disability, of being Spastic and speech impaired, to qualify as an assistant supervisor in the packing division of a leading organization. The job now supports him and his family. Inder was a symbol of inspiration to the children who attended the program. Speaking on the event, Robin Paul, CEO and Founder, Breakthrough said, “Today on the eve of world Disability Day, Breakthrough is happy to create an environment of fun and learning for the Differently Abled Children.  A few years ago a child who had never spoken a word from Baldwin Opportunity School, spoke his first word during one of the activities at Breakthrough. We hope that we have made a positive difference to the children who came to Breakthrough today“.
Breakthrough believes fun and adventure is a way into the lives of Differently Abled Children. During the program, powerful experiences through fun were created for the children.  The children experienced the low ropes course and other unique energy-filled activities during the program.
http://breakthrough-india.com/test/wp-content/uploads/2020/08/BreakThrough-logo-colour.png 0 0 Breakthrough Admin http://breakthrough-india.com/test/wp-content/uploads/2020/08/BreakThrough-logo-colour.png Breakthrough Admin2013-12-02 12:44:002021-06-21 11:06:23Impacting Lives of Differently-Abled Children through Outbound Experiential Learning

No images available at the moment